This is a great place to start!

To learn about the park and where to hike, stop by the Visitor’s Center. This center is staffed by a DNR employee and volunteers of the Starved Rock Foundation. Here is where you will find our ongoing programs, displays, changing showcases, the Le Rocher Bookstore, and information desk.

Just inside the main entrance, are restrooms, vending machines and drinking fountains open till dark.

Most Speaker series and Sunday programs are also started in the program presentation room.

By request we also offer a program entitled The Legend of Starved Rock: Fact or Fiction in which both the story of Starved Rock and historical evidence is discussed. 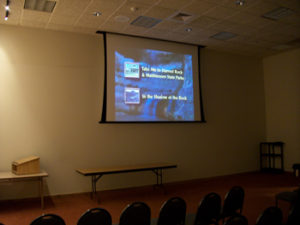 Scale models of The Rock and the Illinois River

Many people want to know what Fort St. Louis looked like, how the siege of Starved Rock happened, or how the Illinois River works.

Come to the Visitor’s Center and get up close to some scale models. 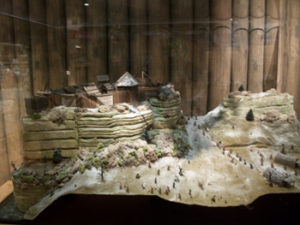 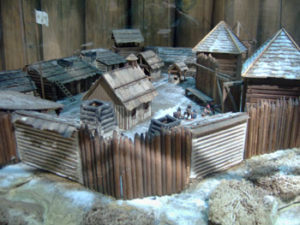 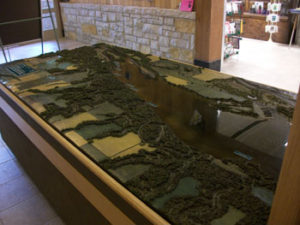 Scale model of the Illinois River

Walk-through display of European Arrival in the Illinois Valley

The Visitor’s Center, like the rest of the park, is geared towards being a full-immersion experience. Instead of just hearing about history and nature, we try to offer experiences for you to experience them. 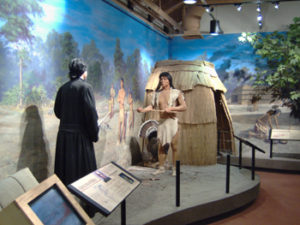 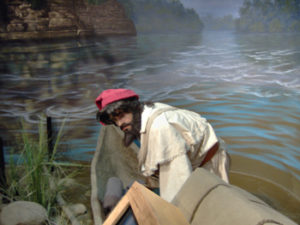 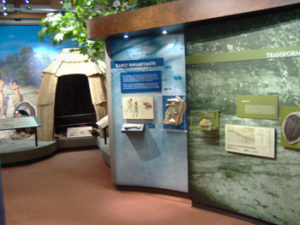 Artifacts from the Newell Fort

In the Starved Rock Visitor Center is a display called the Newell Fort Exhibit. The exhibit contains eighteenth century artifacts of European manufacture that were said to have been uncovered at a site south of Starved Rock by Frank and Jack Newell during the Great Depression. The exhibit includes musket balls, musket parts, gun flints, trade beads, and other items. Although the display is a wonderful collection of historic artifacts, there is some controversy pertaining to what the so-called Newell Fort may have been.

The Newells were not trained archaeologists and the items they unearthed were not the product of an excavation directed by a qualified university trained professional. Making the finds from the Newell Fort site more problematic is the absence of period documentation attesting to a French or English fort, trade post, or other facility located south of Starved Rock.

Some people have speculated that the Newell site may have been the actual location of La Salle’s Fort Saint Louis, a proposition that has no support whatsoever in the well-documented historical record. Others have suggested that the site may have been a small outpost established by Pierre Deliette in the early eighteenth-century.

Whatever the Newell Fort site may have been will likely remain a mystery until credible evidence becomes available. The destruction of the site has rendered the Newell Fort a historical enigma. What is interesting, however, is the wonderful collection of eighteenth century artifacts that can be viewed by the public at the Starved Rock Visitor Center. 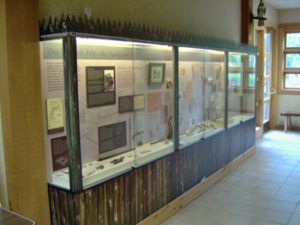 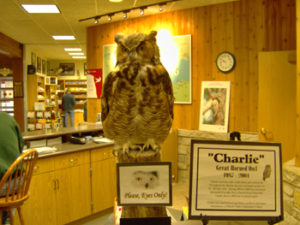 Changing Displays in the atrium

Every couple of months there is a changing display of history or nature in our main atrium. 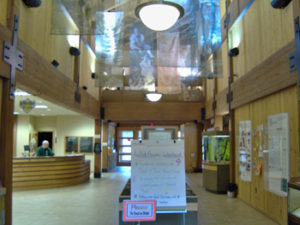 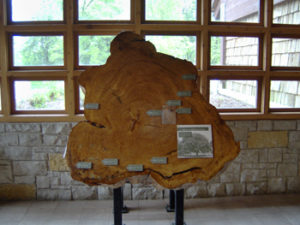 The aquarium located in the Starved Rock Visitor’s Center contains fish that are native to the Illinois River and nearby waterways. The species found in the aquarium may include sauger, white bass, smallmouth and largemouth bass, channel and flathead catfish, bluegill or longnose gar.

Although the aquarium display changes periodically, the fish found in it are a good representative example of the vibrant aquatic life found in the Illinois River. 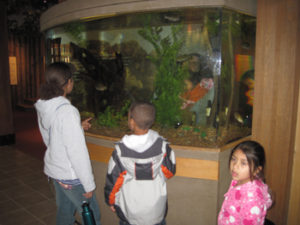